Notes on Phenol and Nomenclature of Phenol | Grade 12 > Chemistry > Alcohols and Phenols | KULLABS.COM

Phenol and Nomenclature of Phenol

Phenols are hydroxy derivatives of benzene obtained by replacing one of the hydrogens of benzene by a hydroxy group. They are represented by general formula Ar-OH, where Ar is phenyl,substituted phenyl or some other aryl group (eg, naphthyl,phenanthryl, etc. When the hydroxyl group is bonded to a carbon of the side chain, ArCH2-OH, the compound is termed as aromatic alcohol.

Phenols differ from alcohols in most of their properties and methods of preparation. However, both being hydroxyl compounds resembles each other to a limited extent, eg ., both can be converted into esters

Like alcohols, phenols may also be classified as monohydric, dihydric,trihydric etc. depending upon the number of hydroxyl groups attached to the aromatic ring.

Phenols are generally named as derivatives of the simplest member of the family,i,e phenol. In the case of phenols having only one additional substituent, the relative position is usually indicated by letters o-(for 1,2-) m- (for(1,3-) and P-for (1,4-). However, numerals are used if more than two substituents are present on the ring. For example. 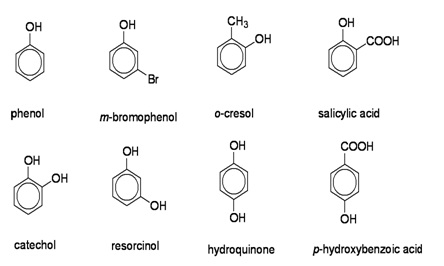 ASK ANY QUESTION ON Phenol and Nomenclature of Phenol