Nepal have a good relationship with foreign countries like Canada, France etc. Canada is among the top 20 countries for buying Nepalese exports. This note contains a description of Nepal’s relation with other countries.

Let us consider an example. The British ambassador is a very high-level representative of Britain. He lives in the British embassy in Kathmandu, and this house is like a small part of Britain. The embassy looks, after all, British people in Nepal; they issue visas to Nepalese wanting to visit Britain. They oversee the many British aid projects, and the ambassadors will speak to the Nepali government on behalf of the British government. Similarly, Nepal sends an ambassador to London.

When countries don't need such a close relationship but want to maintain friendly contact, they appoint a consul. So, for example, Canada has appointed a Nepali citizen to be Canadian consul in Kathmandu. Currently, relations with Nepal are also maintained by the Canadian embassy in New Delhi, India.

Besides their internal funding, developing nations like ours need external support to carry out their development projects and country development activities. Nepal receives foreign aid from individual donor nation like Japan, Germany (Bilateral aid) and from international organizations like the World Bank, European Union, Asian Development Bank (Multilateral aid). The aid can be given (grant assistance) or lent (loan). This may be financial, or technical, or both. Aid schemes are determined by a meeting of donor nations or organizations.

Canada is the second largest country in the world, with one of the lowest population densities. The north is ice and snow, the west has high mountains, the centre is vast, grassy prairies, and in the east, there are great lakes and hilly farmland. Originally units lived in the north and further south. Then many French and British arrived and settled, so English and French are the official languages. Nowadays people have settled in Canada from Europe, Asia and Africa. In the recent past, Canada has helped Nepal's development with some important projects; Kathmandu international airport security system and improving the twin other services; safe water and basic community health in several places; developing trade within SAARC; women's development and hydropower installation.

Canada is among the top 20 countries for buying Nepalese exports, in particular, ready made garments. 1.4% of the tourist coming to Nepal is Canadians. Outside Vancouver, there is a world college for grade 11 and 12 students from all over the world and there is an annual scholarship available for Nepali students.

Videos for Nepal’s Relation with Other Countries 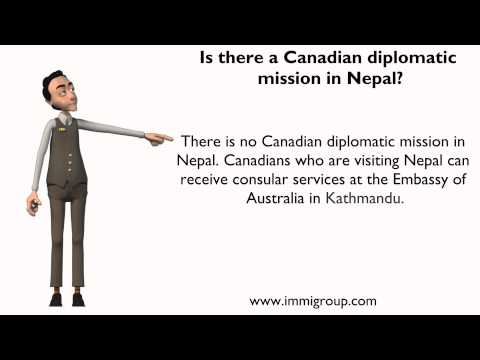 Is there a Canadian diplomatic mission in Nepal?

What kind of college is a world college?

A word college has been established outside Vancouver where students from all parts of the world come to study at the secondary level. It provides scholarship annually to Nepalese students.

Nepal believes in non-alignment. Its foreign policy is to maintain friendly relation with all the countries. If any country threatens and attacks Nepal, it seeks peaceful solution. Failure to this leads this country to approach international peaceful means and solutions to the problems.

Discuss the contributions made by Canada in the development of Nepal.

Canada has made the following contributions:

Why is it necessary to keep good international relationship?

A country is not able in all aspects. It needs other countries. They give and take of help makes life easier. Even when a country cannot help another, it becomes better to remain neutral. It brings good relationship and world peace. Peaceful life leads to progress and prosperity. Unlike this, if there is cold war or hot war for it leads to destruction. One nation frequently interferes another. There will be tug of war for power and land. This disturbs world peace and it becomes a difficult to live. So, it is necessary to keep good international relationship.

There is a close and friendly relation between Nepal and Germany. Mention developmental works done by Germany in the development of Nepal.

Development works carried out by Germany in Nepal are:

What do you mean by non-alignment?

Describe in brief the role played by Nepal to maintain peace in the world.

Nepal is considered as the "zone of peace". It is the birthplace of the legendary apostle of peace lord Gautama Buddha. But Nepal doesn't just stay idle as a witness to all the evidence happening round the world. Nepal is an active participant to peace conference and maintains neutrality in war-affected areas like Lebanon.

What type of work do Nepal Army and Nepali Police Force do in our country?

Nepal Army and Nepal Police have been providing emergency services during floods, landslides, earthquakes, air crash, mountaineering accidents, etc. it solves problems in the country in peaceful manner.
They also fight against anti-nationalist groups. They try to maintain security within the country safeguard human rights of the people.