The climate is the average weather pattern in the certain area experienced over a long time. Climate varies from place to place due to many reasons. This note contains a description of Climate Change; One of Our Greatest Challenges.

The climate is the average weather pattern in the certain area experienced over a long time. Unlike the weather, which is the current atmospheric condition, climate change very little over a long period of time? So climate is also not static and changes due to natural factors. But natural factors account for very little and slow changes only. Due to unchecked human activities, the climate of the globe is changing much more quickly than it would do naturally. Such a change is called climate change, which is one of the greatest challenges the world community is facing in the modern time.

The earth gets warm by receiving solar energy. When the temperature increases, heat is reflected back by its surface. Some of the heat are re-reflected back by the atmosphere. As the walls of a greenhouse, the atmosphere thus lets in the solar light and absorbs the outgoing heat and keeps the atmosphere heated. This process is called greenhouse effect. Due to an extra accumulation of the greenhouse effect, mainly carbon dioxide, methane and nitrous oxide, the process is intensified. Polluted air stops heat escaping and extra heat is trapped and makes earth warmer which is called global warming.

One-fifth of the air in the atmosphere is oxygen, which is needed for every living thing on the planet. When we breathe, we take in oxygen and breathe out carbon dioxide. Trees and plants also take in carbon dioxide and release oxygen. If there were no green plants, we would soon use up oxygen and die. Nowadays there are more people and fewer trees. With economic development, more factories are established leading to more fossil fuel use, more vehicles are used and more forest is cleared. The factories, all kind of transport, power stations and the burning of charcoal produce a vast amount of gases. It is estimated that over 7 billion tonnes of CO2 are released each year through fossil fuel use. Because the trees are getting less they cannot turn it all on oxygen, this is causing global warming.

Climate change has stood a great threat to the modern world. Effects are very serious. World climates have altered. The overall pattern of rainfall has changed; some places receiving excessive rain that triggers landslides and floods while others getting dries, unable to sustain settlement and agriculture. Rainfall amounts are growing in the Polar Regions and declining in the equatorial regions. Grasslands and rainforest are contracting and deserts are expanding. Global temperatures have risen alarmingly. According to the Intergovernmental Panel on the Climate Change (IPCC), a UN component which won Nobel peace prize for the year 2007, the world's average temperature could rise as much as 6°c by the end of this century, killing hundreds of millions of people and changing all life. The rising global temperature has caused ice caps to extra melt. Scientists have warned that if situations don't improve, the whole Arctic Sea ice will melt down between 2050 and 2100 AD. Sea levels are consistently rising, leaving low areas at greater risks of flooding. Worse hurricanes are a common place.

Human activities are most responsible for climate change, which is a world problem. industrialized countries which consume more fossil fuels are more responsible. But effects are worldwide. Polluted air travels place to place to cause similar harms. The task of controlling the climate change cannot be left to one or two countries. Instead, the world community must have a joint commitment towards the goal. However, the rich industrialized countries have more significant roles to play.

The urgent step that needs to be taken as a control measure is to reduce the emission of the greenhouse gases. Forest areas should be expanded. Alternative energy source should be used. At the same time, areas at immediate risk also need to help for mitigating the effects.

Various efforts are being made at international level. United Nations Framework Convention on climate change (UNFCCC) was signed in 1992 by 180 countries plus the European Union as a major international commitment towards controlling greenhouse emissions. The Kyoto Protocol which was adopted in 1997 as a supplementary treaty to UNFCCC and which came into force in 2005 set a target for developed countries to reduce the emission of the six greenhouse gases carbon dioxide, methane, nitrous oxide, hydrofluorocarbons, perfluorocarbons, and sulphur hexafluoride.

In December 2007, representatives from over 180 countries met in Bali, Indonesia where they, with the USA, forced to be flexible, agreed upon the Bali Roadmap) that set forth some tracks needed to reach a secure climate future. They also agreed upon targets for reducing emissions from deforestation and on technology transfer. Later in October in 2009, the Maldives, one of the countries feared to be affected most devastatingly by climate change, held an underwater cabinet meeting. It was followed by Nepali cabinet meeting held in Kala Patthar at an altitude of 5242 m (now having no ice due to excessive melting) on 4 December 2009. Both of these meetings were organized in order to give symbolic messages to world community before the Copenhagen Climate Conference on 7-18 December 2009. It would be the 15th conference of parties(COP15) to the United Nations Framework Convention on Climate Change(UNFCCC).

Videos for Climate Change: One of Our Greatest Challenges 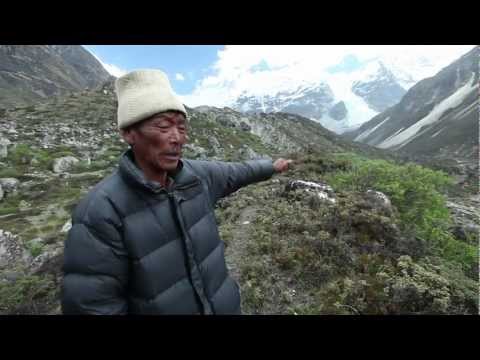 Climate Change in Nepal and Bangladesh: Some Evidence 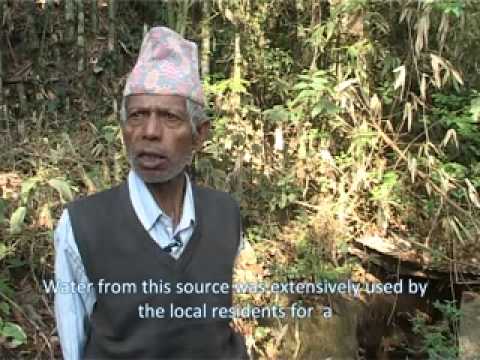 Climate Change in the Mid Hills of Nepal

Climate change is connected with global warming as global warming causes climates to change. Even though a warming trend is global, different areas around the world experience different specific changes in their climates, which have impacts on their local plants, animals and people.

How can atmosphere be compared with the walls of the greenhouse?

The effects of climate change already felt in Nepal are drought, forest fires and flooding. In Nepal, changes in monsoon pattern have greatly exacerbated the situation of unacceptable presence of poverty and inequalities of opportunities in the county.

The symbolic message was to conserve the earth from global warming and climate as the environmental change is irreversible and cause many problems in the future.

The climate in the average climate of the earth or its parts due to the fluctuation in temperature of atmosphere, flow of wind and rainfall is known as climate change. It is changed in following way:
The atmosphere of the earth is made up of gas like nitrogen, oxygen, carbon dioxide, etc.  Among them, some gases have more heat observing and storing capacity while others have less capacity. So, the change in the amount of results the change in temperature of atmosphere. Static reveal that carbondioxide, carbon monoxide, nitrogen oxide, methane gases are increasing in the atmosphere. These gases obstruct the way of the returning of the heat to the space. They absorb the heat or return it to earth, which causes the received heat to be more in amount than the returned heat i.e. radioactive rays. From this temperature of the atmosphere of the earth is increasing. So, the gases that effect in exchange of rays and causes climate change.