"My invention requires a large plant, but once it is established, it will be possible to destroy anything, men or machines, approaching within a radius of 200 miles."
— Nikola Tesla Nikola Tesla is a wholly original and real-life mad scientist. Although he died before the transistor was invented, Tesla used his formidable mind as we use computers today; he designed, constructed, and tested all of his inventions using only the power of mental concentration. Without making a single sketch, Tesla could build precise working models of his electrifying inventions. Tesla's intelligence was sharpened by his intense powers of concentration, which both blessed and tortured him from childhood on. In the extreme case, Tesla appears to have suffered from symptoms of obsessive-compulsive disorder, especially later in life. He spent much of his life working obsessively and in solitude; interacting with ordinary humans seemed difficult for him. Perhaps this is why, in his later years, Tesla claimed to have contacted the superior intelligence: beings from the planet Venus. Despite his eccentricities, or possibly because of them, Nikola Tesla was able to use his mind to improve the lives of billions of human beings.

Childhood: Portrait of a Scientist

There is substantial evidence that, as a child, Nikola's intelligence quotient (IQ) would likely have fallen in the "very superior" range (at least two standard deviations above the mean, above the 95th percentile). There are several reported anecdotes that exemplify his precociousness. When he was only five years old, Nikola informed his father that he was going to harness the power of water. His resulting invention was a water-powered egg beater. By age nine, Nikola's egg beater had been upgraded so that it was powered by the motion of the captured bugs. His innovations mostly helped his mother on household chores. The next year Tesla was solving math equations with such amazing speed that his teachers suspected him of cheating. Nikola performed additional tests under the close watch of his parents and teachers, proving that he was a child prodigy. Little Nikola's technological imagination was in full swing as a child – he believed that someday it would be possible to photograph thoughts.

While Tesla's remarkable cognitive abilities were certainly inherited from his parents (Nikola's father knew the entire Bible by heart and his mother spoke four languages), his inherent brightness was enhanced by nearly obsessive concentration and intense motivation. It is possible that this intensity was a response in part to the tragic death of his older brother, which occurred when Tesla was five. In the aftermath of this tragedy, it is reported that the young Nikola became determined to be as good and as smart as his older brother had been. As a five-year-old child, Tesla demonstrated the ability to sustain his attention for unusually long time spans, spending hours at a time on his projects and inventions. Tesla also had exceptional visual memory abilities; he could hold the idea of a machine or invention in his mind and "test it" through the visual rotation and by visualizing the machine in motion.

Although clearly a brilliant child, Tesla also demonstrated some eccentric and bizarre early behaviors. He was reportedly overly sensitive to certain sounds and physical sensations and could barely tolerate loud noises like a train going by. These sorts of symptoms are often seen in children with a diagnosis of autism (a developmental disorder that impairs communication and social skills), although autistic disorders were virtually unknown at the time Tesla was a child.

Adolescence: Portrait of a Nerd

Tesla graduated from the Serbian equivalent of a four-year high school program in just three years. Then, at the age of 17, he exposed himself to cholera. Why would a genius intentionally expose himself to a deadly disease? Tesla was simply avoiding required military service, so that he could continue his studies. Though Tesla had largely recovered when the military doctor arrived to examine him, he managed to appear weak enough to receive a certificate of disability. This "critical illness" allowed him to secretly return to his studies after a year of rest (during which Tesla reportedly read novels, learned to play billiards with his father, and meticulously memorized the majority of the contents of his local library).

At the Polytechnic Institute in Graz, Austria, and at Prague University, Tesla continued his quest for knowledge and conclusively proved himself a nerd. He regularly woke at 3:00 am to work on his most difficult homework problems (after sleeping only four hours). During the first year of college, Tesla passed nine subject exams when most students only took five subjects. A letter from the dean of Prague University to Tesla's parents declared that, "Your son is a star of the first magnitude." In his free time, Tesla organized the first intercollegiate activity in which a team from one university would challenge a team from another university: chess.

There is some evidence that, as he grew older, Tesla may have suffered from obsessive-compulsive disorder (OCD). It is likely that the same mental focus and intensity that helped him accomplish complex scientific tasks and calculations contributed to his obsessive tendencies. Tesla's likely OCD impaired him in many domains, especially in social interactions; his obsessions included phobias (fears) of dirt and germs, as well as an intense focus on the number three and on completing calculations about things in his immediate environment.

Mental obsessions are often associated with behavioral compulsions performed according to rigid rules. Tesla felt driven to perform repetitive behaviors, such as doing everything in sets of three. For instance, after walking around a block once, Tesla would feel compelled to do so two more times. He also preferred to dine alone, due to his meticulous compulsion to clean his plates and silverware with 18 (divisible by 3) napkins before a meal. (Afterward, he would calculate the cubic contents of all the food on his plate before eating.) Individuals with extreme obsessions and compulsions often have difficulty maintaining relationships, as their idiosyncratic habits impair normal routines and can be time-consuming and embarrassing.

Although an obstacle to social relations, Tesla's obsessions also fueled some of his scientific ideas. In a 1915 article, he predicted that electricity would lead to the purging of microbes, insects, and rodents from the earth. He also predicted that electrical "baths" would be in every home and would rid the body of dust or other small particles and that municipalities would adopt electric dust absorbers and devices to sterilize air, food, and water. Tesla was clearly interested in using technology to alleviate his own obsessional problems. Although he was close to his family, Tesla had very few intimate relationships as an adult. He never married or had children. Tesla's obsessions and his phobia of germs probably contributed to this. It is reported that Tesla did not like touching hair or shaking hands and would avoid human contact for this reason. He frequently worked alone on his inventions, turning things over and over in his mind. During a period of unemployment as an engineer, Tesla took a job digging ditches. During this job, he did develop friendships with his fellow day laborers. Although he seemed capable of developing friendships, Tesla rarely sought or cultivated them.

Tesla had particular difficulties interacting with authority figures, especially his employers. This was due in part to his superior understanding of the electrical systems that he was working on. He faced constant frustration because his mind held perfect designs for futuristic machines that did not yet exist in reality. Instead of being able to freely create his designs, he was forced to work instead for people who could not even comprehend them. Tesla preferred to work alone because he could not slow down to wait for "lesser men" (including Thomas Edison). At times, these "creative differences" would lead to Tesla's dismissal.

In his later years, Tesla became even more socially isolated. He began to spend part of each day methodically feeding pigeons and bringing injured birds back to his Waldorf-Astoria apartment to care for them. Despite his irrational fear of germs, he was often seen in the park with pigeons covering his arms (he even had a favorite white pigeon who visited his apartment window).

An undisputed genius, Tesla pounded out over two-hundred radically new inventions. Half a century after his death, more than one hundred of Tesla's patents are still in active use by countless millions of people. Tesla's creations included a host of brilliant (and by now mundane) inventions, including the arc light, alternating current motors, and systems for transmitting electricity and lighting homes. He is most famous for the "Tesla coil," designed to step up electrical voltages at high frequencies – a required step for propagating waves with antennas. It is argued that Tesla should be credited with the invention of the radio, too. In fact, his system of oscillating, tuned circuits did make the radio possible. Tesla also introduced the concept of the microwave oven. He possessed a strong intuitive understanding of electricity and radio waves, which was no doubt enabled by his ability to envision completely functional machines in motion.

Tesla proposed many ideas about the power that were fairly accurate, and some others that were a bit outlandish. For instance, he understood that wireless transmission of energy was possible, but did not recognize that there would be limits on how much energy could be transmitted through the air. Tesla envisioned a huge tower that would distribute free energy to everyone on Earth by bouncing current off of the ionosphere, but he did not realize that this technique would not generate sufficiently high currents for running things like lights and appliances (although it does work for AM radio). Tesla also envisioned this device as a giant weapon, which he attempted to sell for defense purposes. Tesla also believed that one could use this energy to change Earth's weather patterns, which scientists today believe is impossible. Tesla's understanding of the ionosphere and wireless energy transmission was certainly far ahead of his time, but his visions sometimes exceeded the constraining realities of the physical world.

Tesla's reputation as a living "mad" scientist was cemented by the so-called "alien incident." His mental faculties were called into question by much of the scientific establishment after he declared that he was receiving messages from inhabitants of either Mars or Venus over his radio-receiving equipment. He believed that there was life in the universe besides our own and was intensely interested in finding ways to communicate with other inhabitants of our solar system. Unfortunately, Tesla was never able to convince other scientists that he had detected signs of intelligent extraterrestrials.

Tesla may have harbored some unusual thoughts and beliefs, but his scientific accomplishments are undeniable. In fact, the very characteristics that made Tesla "mad" may have contributed the most to his scientific genius. His ability to concentrate and focus on mental images was no doubt related to both his obsessive-compulsive tendencies and his skill at envisioning amazingly complex electrical machines in action. Tesla's life illustrates the fine line that exists between genius and madness.

He was a Great Scientist 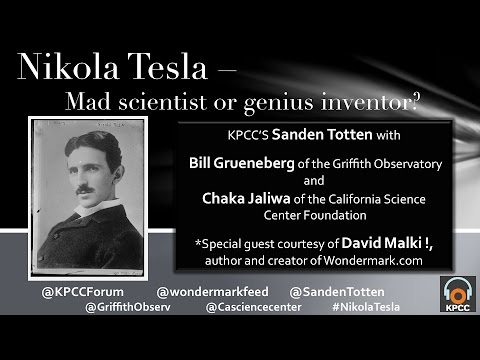