Thomas Alva Edison was a great scientist born on Feb 7, 1847 in Milan, Ohio. He was a great inventor who changed the world his way.

A savvy businessman, he held more than 1,000 patents for his inventions.

The inventor of the light bulb, phonograph, and motion picture, Thomas Edison was granted 400 patents from 1879 to 1886. Though he changed technology forever, not all of his inventions were successful.

Birth of a Mega Mind

Born on February 11, 1847, in Milan, Ohio, Thomas Edison rose from humble beginnings to work as an inventor of the major technology. Setting up a lab in Menlo Park, some of the products he developed included the telegraph, phonograph, electric light bulb, alkaline storage batteries and Kinetograph (a camera for motion pictures).

Inventor Thomas Alva Edison was born on February 11, 1847, in Milan, Ohio. He was the last of the seven siblings of Samuel and Nancy Edison. Thomas's father was an exiled political activist from Canada. His mother, an accomplished school teacher, was a major influence in Thomas's early life. An early bout with scarlet fever left him with hearing difficulties in both ears, a malady that would eventually leave him nearly deaf as an adult. Although, there are different stories related to his deafness.

In 1854, the family moved to Port Huron, Michigan, where Edison attended public school for a very short time( 3 months). He was a hyperactive child, and was considered "difficult to handle" by his teacher. His mother quickly pulled him from school and taught him at home. He had specific taste for 'Chemistry' and spent most of his time in a small lab which he had set up in the basement of his home. He was just 11 years old at that time.

At age 12, Edison set out to put much of that education to work. He convinced his parents to let him sell newspapers to passengers along the Grand Trunk Railroad line. Exploiting his access to the news bulletins teletyped to the station office each day, Thomas began publishing his own small newspaper, called the Grand Trunk Herald. The up-to-date articles were a hit with passengers. This was the first of what would become a long string of entrepreneurial ventures where he saw a need and capitalized on opportunity.

Edison also used his access to the railroad to conduct chemical experiments in a small laboratory he set up in a train baggage car. During one of his experiments, a chemical fire started and the car caught fire. The conductor rushed in and struck Thomas on the side of the head, probably furthering some of his hearing loss. He was kicked off the train and forced to sell his newspapers at various stations along the route.

Edison Saved a Child and was Rewarded

While he worked for the railroad, a near-tragic event turned fortuitous for the young man. After Edison saved a 3-year-old from being run over by an errant train, the child's grateful father rewarded him by teaching him to operate a telegraph. By age 15, he had learned enough to be employed as a telegraph operator. For the next five years, Edison traveled throughout the Midwest as an itinerant telegrapher, subbing for those who had gone to the Civil War. In his spare time, he read widely, studied and experimented with telegraph technology, and became familiar with electrical science.

In 1866, at age 19, Edison moved to Louisville, Kentucky, working for The Associated Press. The night shift allowed him to spend most of his time reading and experimenting. He developed an unrestrictive style of thinking and inquiry, proving things to himself through objective examination and experimentation. Initially, Edison excelled at his telegraph job because early Morse code was inscribed on a piece of paper, so Edison's partial deafness was no handicap. However, as the technology advanced, receivers were increasingly equipped with a sounding key, enabling telegraphers to "read" message by the sound of the clicks. This left Edison disadvantaged, with fewer and fewer opportunities for employment.

In 1868, Edison returned home to find his beloved mother was falling into mental illness and his father was out of work. The family was almost destitute. Edison realized he needed to take control of his future. Upon the suggestion of a friend, he ventured to Boston, landing a job for the Western Union Company. At the time, Boston was America's center for science and culture, and Edison reveled in it. In his spare time, he designed and patented an electronic voting recorder for quickly tallying votes in the legislature. However, Massachusetts lawmakers were not interested. As they explained, most legislators didn't want votes tallied quickly. They wanted time to change the minds of fellow legislators.

On his way to become the greatest inventor ever

In 1869, Edison moved to New York City and developed his first invention, an improved stock ticker, the Universal Stock Printer, which synchronized several stock tickers' transactions. The Gold and Stock Telegraph Company was so impressed, they paid him $40,000 for the rights. Edison was only 22 years old. With this success, he quit his work as a telegrapher to devote himself full-time to inventing.

In 1870, Thomas Edison set up his first small laboratory and manufacturing facility in Newark, New Jersey, and employed several machinists. As an independent entrepreneur, Edison formed numerous partnerships and developed his products for the highest bidder. Often that was Western Union Telegraph Company, the industry leader, but just as often, it was one of Western Union's rivals. In one such instance, Edison devised for Western Union the quadruplex telegraph, capable of transmitting two signals in two different directions on the same wire, but railroad tycoon Jay Gould snatched the invention from Western Union, paying Edison more than $100,000 in cash, bonds and stock, and generating years of litigation.

With his ever-increasing financial success, in 1871 Edison married 16-year-old Mary Stilwell, who was an employee at one of his businesses. During their 13-year marriage, they had three children, Marion, Thomas and William, who became an inventor. Mary died of a suspected brain tumor at the age of 29 in 1884.

By the early 1870s, Thomas Edison had acquired a reputation as a first-rate inventor. In 1876, he moved his expanding operations to Menlo Park, New Jersey, and built an independent industrial research facility incorporating machine shops and laboratories. That same year, Western Union encouraged him to develop a communication device to compete with Alexander Graham Bell's telephone. He never did. However, in December of 1877, Edison developed a method for recording sound: the phonograph. Though not commercially viable for another decade, the invention brought him worldwide fame.

The 1880s were a busy time for Thomas Edison. After being granted a patent for the light bulb in January 1880, Edison set out to develop a company that would deliver the electricity to power and light the cities of the world. That same year, Edison founded the 'Edison Illuminating Company' the first investor-owned electric utility which later became the General Electric Corporation. In 1881, he left Menlo Park to establish facilities in several cities where electrical systems were being installed.

In 1882, the Pearl Street generating station provided 110 volts of electrical power to 59 customers in lower Manhattan. In 1884 Edison's wife, Mary, died, and in 1886, he married Mina Miller, 19 years his junior. In 1887, Edison built an industrial research laboratory in West Orange, New Jersey, which served as the primary research laboratory for the Edison lighting companies. He spent most of his time there, supervising the development of lighting technology and power systems. He also perfected the phonograph and developed the motion picture camera and the alkaline storage battery.

Over the next few decades, Edison found his role as inventor transitioning to one as industrialist and business manager. The laboratory in West Orange was too large and complex for any one man to completely manage, and Edison found he was not as successful in his new role as he was in his former one. Edison also found that much of the future development and perfection of his inventions was being conducted by university-trained mathematicians and scientists. He worked best in intimate, unstructured environments with a handful of assistants and was outspoken about his disdain for academia and corporate operations.

On a couple of occasions, Edison was able to turn failure into success. During the 1890s, he built a magnetic iron-ore processing plant in northern New Jersey that proved to be a commercial failure. Later, he was able to salvage the process into a better method for producing cement. On April 23, 1896, Edison became the first person to project a motion picture, holding the world's first motion picture screening at Koster & Bial's Music Hall in New York City.

As the automobile industry began to grow, Edison worked on developing a suitable storage battery that could power an electric car. Though the gasoline-powered engine eventually prevailed, Edison designed a battery for the self-starter on the Model T for friend and admirer Henry Ford in 1912. The system was used extensively in the auto industry for decades.

During World War I, the U.S. government asked Thomas Edison to head the Naval Consulting Board, which examined inventions submitted for military use. Edison worked on several projects, including submarine detectors and gun location techniques. However, due to his moral indignation toward violence, he specified that he would work only on defensive weapons, later noting, "I am proud of the fact that I never invented weapons to kill."

By the end of the 1920s, Thomas Edison was in his 80s and he slowed down somewhat, but not before he applied for the last of his 1,093 U.S. patents, for an apparatus for holding objects during the electroplating process. Edison and his second wife, Mina, spent part of their time at their winter retreat in Fort Myers, Florida, where his friendship with automobile tycoon Henry Ford flourished and he continued to work on several projects, ranging from electric trains to finding a domestic source for natural rubber.

Thomas Edison died of complications of diabetes on October 18, 1931, in his home, "Glenmont", in West Orange, New Jersey. He was 84 years old. Many communities and corporations throughout the world dimmed their lights or briefly turned off their electrical power to commemorate his passing. Edison's career was the quintessential rags-to-riches success story that made him a folk hero in America. An uninhibited egoist, he could be a tyrant to employees and ruthless to competitors. Though he was a publicity seeker, he didn't socialize well and often neglected his family. By the time he died he was one of the most well-known and respected Americans in the world. He had been at the forefront of America's first technological revolution and set the stage for the modern electric world.

Edison considered one of greatest inventors is credited today for helping to build America's economy during the nation's vulnerable early years. 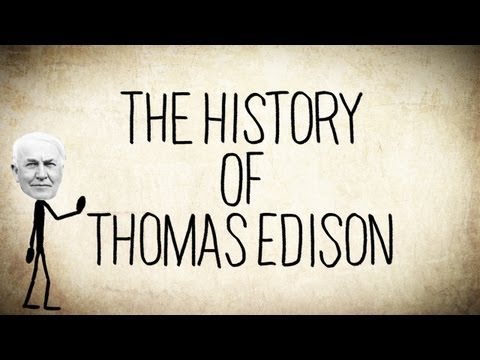 The History of Thomas Edison - a Short Story 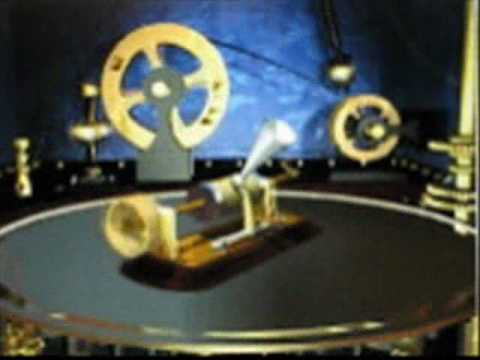