Asia is crossed by the equator in the south, by the Tropic of Cancer in the center and the Arctic Circle in the north and is the biggest continent. This note contains a description of Physical Features of Asia.

Asia is crossed by the equator in the south, by the Tropic of Cancer in the center and the Arctic Circle in the north. Asia is the biggest continent. It is bounded by the Pacific Ocean in the east, Arctic Ocean in the north and Indian Ocean in the south. In the west lies the continent of Europe. The Ural Mountains divide it from Europe in the west; the Red Sea and Suez Canal cut it off from Africa, and the Bering Strait, 88 km from sea, separates it from North America in the east. Asia occupies 1/3rd of the world's land area. But 2/3rd of the world population lives in Asia. It contains more than 40 countries and every type of climate.

Asian landform highly varies. The continent constitutes many high mountain ranges of the world, including the Himalayas, the highest of all. Mt.Everest, a peak in the Nepalese part of the Himalayas is the highest peak in the world. The Karakoram, Kunlun, and Hindu Kush are other important ranges. These high ranges run into different directions from the Pamir Knot, popularly known as 'the roof of the world' where the borders of India, Pakistan, Afghanistan, Tajikistan and china converge. Iranian plateau, Tibetan plateau and Deccan plateau in India are high-lying. The north of Asia is great Siberian plain formed by acidic soil and mostly covered by ice. Extensive valleys and basins drained by the Hwang Ho, Irrawaddy, Ganges, Indus, Tigris, Euphrates, etc. have remained the areas of famous ancient civilizations. Coastal plain mainly in the east and south-east are fertile agricultural regions.

The physical features of Asia can be classified into following:

The Northern features
The northern valleys continue from Ural mountain in the west to the Bering strait in the north-west. This area consists of the Great Siberian plain which has been created by the rivers Ob, the Yenisey, and Lena. The rivers run near northern side toward the Arctic ocean.

The Central mountains and plateaus
The Himalaya mountains extend from Indian subcontinent to the rest of Asia. It is situated to the south of the northern lowlands. The Karakoram, the Elbruz, the Sulaiman, theKunlun and TieaShan and the Himalayas are the major important mountains of the Asia. The Himalayas are so vast that they are composed of three different mountain belts. On the other hand, there are many plateaus.The plateau is not uniformly flat but contains some high mountains and low river basins. The Tibetan plateau is the largest plateau of the Asia which is also known as the "Rooftop of the world".

The Great River valleys
The first great civilizations all grew up in river valleys. These valleys are situated between the central mountain ranges and the southern plateaus. Some major rivers of this region are Tigris, Euphrates, Hwang Ho, Mesopotamian, Indus, Yangtze, Brahmaputra, Menam, and the Ganges.

The Island chains
The island chains extend in the east and south-east of the mainland of Asia. Where chain of an island is found. The group of island is synonymously known as Archipelago of Asia. Some major island of this is Japan, Philippines, Java, Sumatra etc.

Asia is a very large landmass extending from the equatorial to the Polar Regions. This makes it possible for the continent to have all kinds of climates of the world. The peninsulas and islands in the south and in the south-east of the continent have the tropical wet climate. South Asia along with eastern china and neighboring areas, has tropical monsoon climate while south-western part of the continent, often known as the Middle East, has a hot desert climate. Central Asia that lies beyond the great mountains and far from the sea is rain shadow area and has extreme climate conditions. The Gobi is a cold desert at its center. The far north has temperature often below the freezing in winter.

Asia's natural vegetation greatly varies as per the diverse landform and climate conditions. Pine trees grow in very cold conditions of the month. Their leaves are rolled up to form needles and this prevents them from losing water. These conical-shaped coniferous forests are found extensively in Siberian plain. The pine forest belt is known as taiga. There is a region of grassland called steppe in a band extending across China, Mongolia, Kazakhstan, and Russia, and extending further into Europe. Temperate forests have broad-leaved trees.

Tropical rain forest found in the areas near the equator is very thick with tall trees up to 30 m, some are much higher and than other lower-level trees. There are many species, of animals, birds and insects. The wood is hard and valuable. Many of the Asian forests are in danger from deforestation and there is very little vegetation in the hot deserts of the Arabian Peninsula.

Videos for The Physical Features of Asia 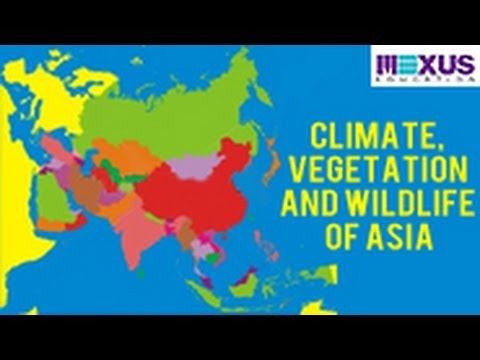 Climate, Vegetation and Wildlife of Asia 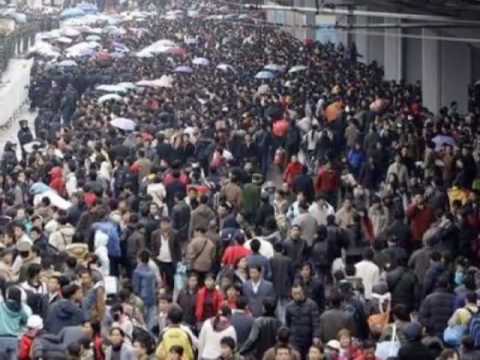 The Geography and Cultures of South East Asia Volume 01 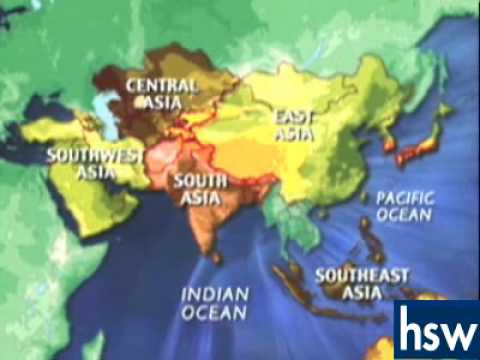 World Geography - The Geography of Asia and the Pacific

What are the climates found in Asia?

The climates found in Asia are:

i. The equatorial climate;

vi. The Manchuria type of climate;

vii. The Siberian type of climate;

Give the location of Asia and boundaries of Asia.

The continents of Asia stretches from the frozen shores of the Arctic Ocean far inside the Arctic circle into the tropics and southern most part of the mainland nearly reaches for the equator. In other words, the continent extends from 10 degree S to 80 degree N. From west to east it stretches roughly from 25 degree E to 170 degree E.

Asia possesses more than half of the total population of the world. List out the possible reasons.

The possible reasons are:

a. Most of the people in the Asian countries are illiterate and because of lack of education fertility rate increases.

b. People in Asian countries are socially bounded, they are very conservational minded. It results in increase in population.

c. Most of Asian countries are undeveloped. Poverty, unemployment and increase in crime are other characteristics of these countries. As the people’s mind is not engaged in creative works they go on producing children.