Work done by force acting on a body is defined as the product of force and displacement of the body in the direction of the force. This note provide us the information about work and its types.

Work= Force × Displacement (in the direction of the force)

The SI unit of force is newton (N) and that of displacement is a metre (m). So, the unit of work is Newton metre (Nm), which is Joule (J).

Thus, one joule of work is said to be done when one Newton force displaces a body through one metre in its own direction.

Force is to be applied to move, roll, or drag a body over a surface of another body. Example: If an object is dragged to a certain distance (d).

Activity: To demonstrate work against friction.

Force is applied to lift a body against the force of gravity. Example: If an object is lifted to a certain height (h).

Activity: To demonstrate the work against gravity. 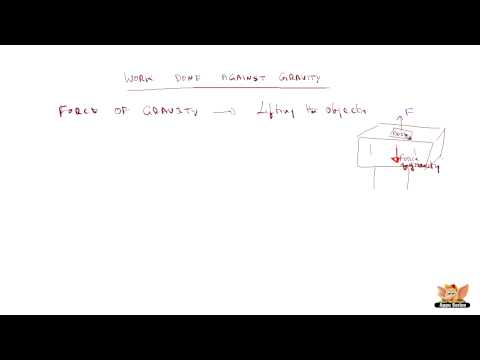 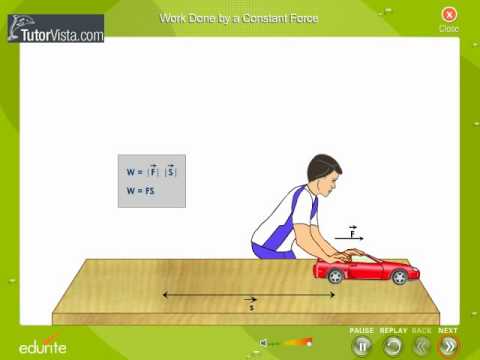 Work Done by a Constant Force

What is work? Write its SI unit.

Work is said to be done only when the force applied to the body produces a displacement in the body.
Mathematically,
Work done is by the force acting on a body is defined as the product of force and displacement of the body in the direction of force.
i.e. Work = Force x displacement
W = F x d.

Mention the factors that affect the amount of work done.

When a person pushes a building, even if he gets tired, he doesn't do any work, why?

To do work there must be motion of object with the application of force. But here, displacement of the building is zero.
i.e. W = F x 0 = 0
Hence, even if he gets tired, there is no work done.

1 J (1 Joule) work is said to be done if 1 Newton force displaces a body through a distance of 1 meter in the direction of force.

The CGS unit of force is 'erg'.

Work done is scalar quantity, why?

It is because it does not require any direction for its description.

Is it possible that a force is acting on a body but still the work done is zero? Explain.

Yes, it is possible that a force is acting on a body but still the work done is zero. For example, in case of a man pushing a hill.

What are the types of work done? Define them.

There are two types of work done:

What happens when force is applied perpendicular to the displacement?

Express the unit of work done in terms of fundamental unit.

What do you mean by 1 erg work?

1 erg work is the work done by a force of 1 dyne to move a body through a distance of 1 cm in the direction of force.

Write the formula relating to work, force and displacement.

A porter carrying a load of 30kg climbs up a mountain having vertical height of 1.5km from the ground. Calculate the work done against gravity (g = 10m/s2).

If the work done while pushing a bus through a distance of 10m is 50KJ. Calculate the force of friction of the ground.

Thus, the force of friction of the ground is 5000N.

How can we decrease the density of water without boiling it?

How much work is done by a force of 10N while moving an object through a distance of 1m in the direction of the force?

A trolley is pulled on a slanted surface by applying an effort os 200N. If the length of the slope is 20m and the angle between the horizontal surface and inclined slope is 15 \(^o\) calculate the total work done.