A mixture is defined as a mass obtained by mixing up two or more chemically non-reactive substances in any proportion by weight. There are two types of mixture. They are as follows:

A homogeneous mixture is defined as a mass in which the particles of the components of the mixture are equally distributed. Examples: Sugar solution, air, alcohol water, brass, soda water etc

A heterogeneous mixture is defined as a mass in which the particles of components of the mixture are not equally distributed. Examples: Smoke, Oily water, Sandy water, etc.

On the basis of the size the particles are divided into following types:

The solution is defined as the homogeneous mixture of two or more than two substances that can be formed either by mixing suitable solid in the liquid or by the liquid in liquid.

Solution = solute + solvent
Solute: It is the component of a solution, which gets dissolved into other substance to form a solution.
Solvent: It is the substance, which dissolves solute to form a solution.
Water: It is a universal solvent that has the capacity of dissolving many substances like common salts, copper sulphate, sugar, etc.
Alcohol: It found in the form of spirit and can dissolve resin and iodine.
Petrol and kerosene: It dissolves ghee, grease, oil, fat, etc and is used for removing clothes stain.
Ether: It is an organic solvent that can dissolve fat, oil, resin, etc.

Colloid is a homogeneous mixture in which the diameter of particles of components ranges in between that of particles of a solution and suspension, i.e. a particle’s size ranges from 10-7 cm to 10-5 cm. The colloidal solution of liquid in liquid is called emulsion. Some of the examples of colloids are blood, milk, gum, wax, etc.

The suspension is a heterogeneous mixture in which the diameter of the particle is 10-5 cm or larger. Their particles are visible under a simple microscopic as well as to the naked eyes. Some of the examples of suspensions are sand water, muddy water, smoke in air, etc. 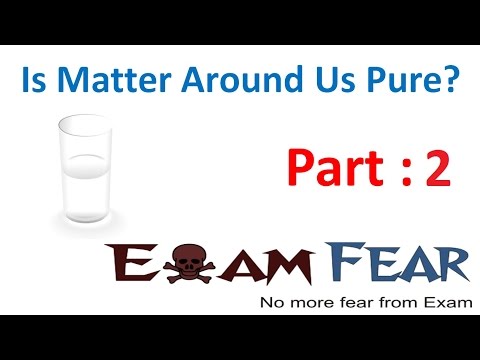 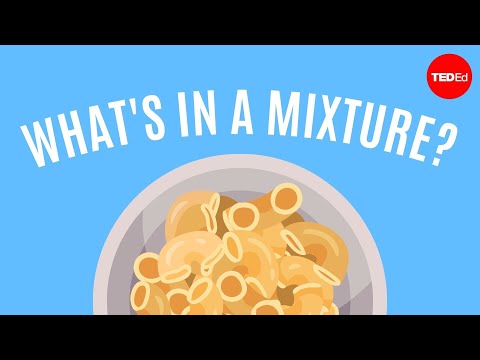 The science of macaroni salad: What's in a mixture? - Josh Kurz

List the types of mixture on the basis of size of particle.

Mixtures are of three types on the basis of size of particles, they are:

Why does a solute dissolve quickly at high temperature and at powdered state?

When solid is heated, its molecule gain more energy and start to vibrate vigorously. On heating solvent, the molecules of liquid gain more energy and start moving vigorously, so that, intermolecular space increases. When the intermolecular space increases, then the dissolving capacity also increases. Thus, the solubility of a substance increases on heating.
If the solute particular are converted into powder, then the surface area of solute increases. It makes the molecule of solvent come in contact with molecules of solute at faster rate and it dissolves quickly.

Define the terms 'solute' and 'solvent' with one example each.

Solute is defined as the substance which gets dissolved and is present in smaller proportion is called the solute. Example: In sugar solution, sugar is solute.

Solvent is defined as the substance which dissolves the solute and is present in larger proportion is called solvent. Example: In salt solution, water is a solvent.

The solubility of common salt at 30\(^0\)C is 100.  What amount of water is required to prepare a saturated solution of 1kg of salt ?

Therefore, the weight of water in the saturated solution = 10000g.

Thus, 5g sodium nitrate is seperated by cooling the solution.

What is the saturated solution?

The solution in which more amount of solute can dissolve in given solvent at given temperature.