Causes of Refraction of Light

Causes of Refraction of Light

Some examples of refraction of light: 1. The apparent upward bending of a pencil when placed in water:

The given figure shows a pencil ABC placed in a trough of water. The pencil appears bent upwards from the point B. Rays CE and CD from the end C of the pencil pass from water to air, and are bent away from the normal along EE’ AND DD’ respectively, since they are passing in rarer medium. To the eye, they appear to come from point C’ above C. C’ is thus the image of C as a result of the refraction. The same reasoning applies to any point on the immersed portion of pencil BC so that the observer sees an image apparently in the position BC. In the given figure, a coin ‘o’ is placed at the bottom of a beaker containing water. Two rays OA and OD from O are refracted along OA and OD from O are refracted along AB and DE respectively. These divergent rays appear to come from ‘I’ which is the virtual image of ‘O’. Clearly, the image ‘I’ is at a less depth than ‘O’. Thus, the coin at ‘O’ appears to rise at ‘I’ when the coin is kept in water. The Same phenomenon explains why a swimming pool appears shallower than it really is.

The light from the stars passes through the atmosphere before it reaches an observer on the earth. Stars twinkles due to change in density whichis in a small range, the image of the star appears to move within a small area in the space and this gives to twinkling effect. Stars do not appear twinkling if they are viewed from above the earth’s atmosphere. Twinkling effect is observed if the stars are viewed from earth’s surface. Let a point object O be placed just below a rectangular glass slab ABCD of thickness AD or BC as shown in the figure. A ray OP incident normally on the surface CD passes to air without deviation along PQ. Ray OS in the glass is refracted along SR in the air. The two rays meet at I when produced back. Thus, ‘I’ is the virtual image of the object ‘O’. Hence, the object at ‘O’ appears raised at ‘I’. When viewed directly the object O through the glass slab. Let ∠OSN = ∠i be the angle of the incidence in the glass and ∠MSR = ∠r be the angle of refraction in the air. Here, PO is real depth and PI is medium, the object appears to be in less depth due to refraction. Such less depth is called apparent depth and the actual depth is called real depth.

Videos for Causes of Refraction of Light 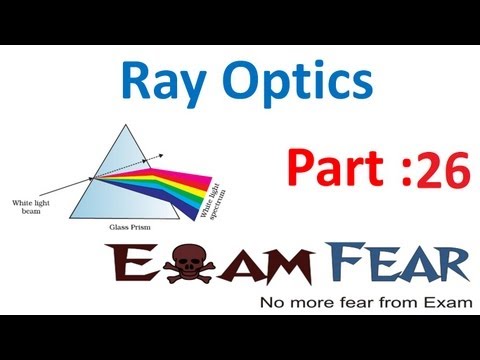 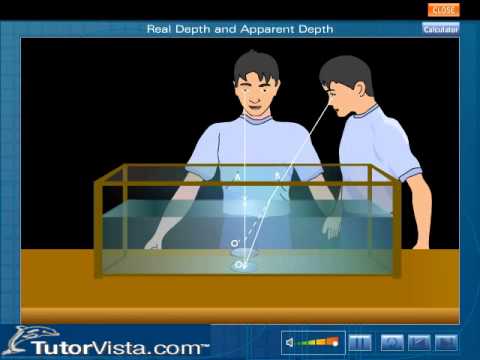 The process of bending of light as it passes from one medium to another medium is called refraction of light.

Draw a neat labeled diagram to show the process of refraction of light in a glass slab.

What is the main cause of refraction?

Give any two effects of refraction in our daily life.

Give laws of refraction.

The laws of refraction are as follows: Mathematically,

The refractive index of a medium is defined as the ratio of velocity light in air (or vacuum) to the velocity of the light in the medium.
∴ RI of a medium =

Study the given figure carefully and answer the following questions:

The refraction of light is shown in the figure.
In the gven figure:
AO → incident ray
OB → refracted ray
BC → emergent ray
MN = normal
∠AOM = Angle of incidence
∠BON = Angle of refraction
Since the refracted ray bends towards the normal we can say light comes from rarer medium (water) and falls to denser medium (glass).

A beam of light makes an angle of incidence 200 and angle of refraction 300 with the normal. If air and glass were two medias, then answer the following:

When a beam of light travels from denser medium to rarer medium, it bends away from the normal. So, the angle of refraction is greater than the angle of incidence.

Study the given diagram and answer the following questions.

The apparent depth of water in a pond is less than its real depth, why? Give reason.

Due to refraction of light , light rays coming from the bottom of pond, (i.e. denser medium) bends on the surface of water and passes to the air (i.e. rarer medium). These deviated rays reach on our eyes and the bottom of the pond appears slightly upwards than its actual position. As a result, the apparent depth of water in pond is less than its depth.

If a spear is shot exactly at the place where fish is seen in water, the fish does not get hit, why?

The stars in the sky seem twinkling, why?

The atmosphere of the earth contains of layers of air with different densities. Due to wind, the densities change continuously. The rays of the light coming from the stars pass through the atmosphere and get refracted. These refracted rays come to our eyes and we see the stars as twinkling.

The angle of incidence for which the angle of refraction is 900 when light ray passes from denser medium to rarer medium is called critical angle.

Here, c is the critical angle.

When an incident ray of light from denser medium goes to rarer medium with the angle of incidence greater than the critical angle, all the rays of light are reflected back in the denser medium. This phenomenon is called total internal reflection of light.

The angle of incidence for which the angle of refraction is 900 when light ray passes from denser medium to rarer medium is called critical angle. Critical angle of glass, water and diamond are as follows:

Give the relation between refractive index (µ) and critical angle (C) of any substance.

Refractive index is inversely proportional to the sine of critical angle.

What do you mean by critical angle of glass is 420. Give your opinion with a suitable diagram.

Observe the given figure and answer the questions.

What are optical fibers? Write down their main uses.

Optical fibers are very small thread of transparent glass that works as a light pipe. Their main uses are:

Give any two effects of total internal reflection of light.

Any two effects of total reflection of light are as follows:

What is mirage? Explain with suitable diagram, how it is formed.

In summer, in the coal tarred roads or in the deserts, optical illusion is observed due to total internal reflection of light. This phenomenon is called mirage.

In a hot sunny day in a summer, air in the ground level gets heated and acts as a rarer medium than the air upwards. A ray of light coming from the top of the tree passes from denser layers to rarer layers and undergoes total internal reflection to the observer. Due to the total internal reflection of light, the observer feels an illusion that there would be water on the road and floating the tree on it. This is mirage.

Why does diamond sparkle?

Give any two uses of total internal reflection of light.

What is light pipe? Write down its use.

A light pipe is a bent rod made by transparent glass which works on total internal reflection of light.
It is used by the doctors to observe the internal organs like stomach, nose, ear, etc.

Solution:
The relation is given by,
Refractive index (µ) =

The apparent depth of a pond appears to be 5m. If the refractive index of water is

, find the real depth of the water.

A ray of light is incident on the air on the surface of a glass block. If the angle of incidence is 300 and refractive index of glass is 1.5, find the angle of refraction.

A ray of light in air goes to the sheet of ice with an angle of incidence of 450 and refracted within the ice at an angle of 300. What is the refractive index of the ice?

A small coin lies at the bottom of the beaker containing water at a depth of 20cm. Find the apparent depth of the coin. (RI of water = 1.33)

The real depth of a pond is 2m, If the refractive index of water is 1.33, find the apparent depth of the pond.

The refractive index of diamond is 2.42,  find its critical angle.

Calculate the potential difference on a 2Ω resistor when the current circuit in it is 2A across it.

Hence , the potential difference is 4V.