Plant kingdom includes all the unicellular and multicellular plants. Cryptogams are primitive and simplest plants while all kinds of flowering plants are called phanerogams. Algae include all those thallophytes which contain green pigment as chlorophyll. This note provides us the information about plant kingdom and it's classification with example.

Carolos Linnaeus divided the world of living organisms into two kingdoms: animal kingdom and plant kingdom . There are millions of species of plants. They vary from small size to a large size. On the basis of presence or absence of flowers, all the plants are divided into two major sub-kingdoms: cryptogams and phanerogams.

They are promitive and somplest plants without flowers. They are On the basis of appearance and stage of development, cryptogams are divided into three divisions. They are: Thallophyta, bryophyta and pteridophyta.

They are the most primitive and the simplest plants. They may be multicellular or multicellular. They possess following characteristics:

Thallophyta is divided into two sub-divisions. They are algae and fungi. Algae are the green thallophytes which have the following characteristics: Fungi include non-green plants and have following characteristics: Bryophyta have the following characteristics: 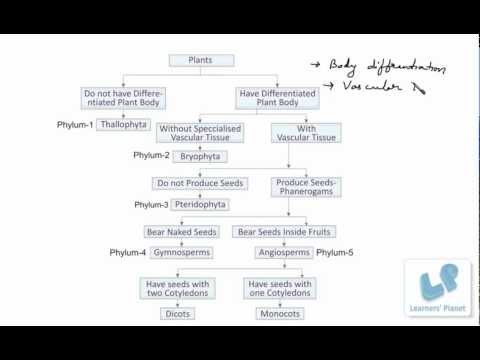 Criteria for classification of plants

The major groups of plant kingdom are:
i) Cryptogams (Non-flowering) and
ii) Phanerogams (flowering)

What are cryptogams? In how many divisions it is divided? Write its name.

The groups of plants which do not bear flower and seeds are called cryptogams. It is sub-divided into three divisions:
i) Thallophyta
ii) Bryophyta
iii) Pteridophyta

What are the characteristic features of cryptogams?

The characteristics feature of cryptogams are:
i) They do not bear flower and seed.
ii) They are lower plants.
iii) They reproduce by both a sexual and asexual methods.
iv) They may be unicellular or multicellular.
v) Their mode of nutrition is autotrophic or heterotrophic.

Some features of Thallophyta are as follows:
i) The plant body is not differentiated into roots, stems and leaves.
ii) They may be unicellular or multicellular.
iii) They are autotrophic or heterotrophic.

Distinguish between algae and fungi.

The differences between algae and fungi are as follows:

What do you mean by autotroph and heterotroph?

Write the subdivision of following organisms and state any two of characteristics.
Nostoc and yeast.

Nostoc
Sub-division = Algae
i) It prepares food itself due to presence of chlorophyll.
ii) It is mostly aquatic, only few species are terrestrial.
Yeast
Sub-division = fungi
i) Fungi are heterotrophic.
ii) They obtain their nutrition as saprophytes or parasites.

Why are the bryophytes called amphibians of plant kingdom?

A thin film of water is necessary for fertilization in bryophyte. The moisture should be available for a least part of year so that motile antherzoids may swim to the archegonium through a film of water. So, water is necessary for the completion life cycle through the plants grow on land. Thus, the bryophytes are called amphibians of plant kingdom.

What are the three features of bryophyte?

The three features of bryophyte are as follows:
i) They show alternation of generation with gametophyte as main generation.
ii) They are found in moist and shady places.
iii) They prepare their own food due to the presence of chlorophyll.

State any three characteristics of pteridophyta with examples.

The important features of pteridophyta are as follows:
i) They are sporophyte.
ii) They possess xylem and phloem tissues.
e.g. fern, horse tail, lycopodium, selaginnellia, equisetum etc.

Why are pteridophytes more advanced than Bryophytes?

Pteridophytes are more advanced than Bryophytes due to the following reasons:
a) Plant body is well developed into root, stem and leaves.
b) Pteridophytes possess vascular tissues: xylem and phloem.

Distinguish between moss and fern.

The difference between moss and fern are as follows:

Fern plants are important because
i) They can be used in decorative purposes.
ii) They are used as medicinal herbs.