A hollow wooden or metallic tube used to produce sound is called an organ pipe. This note provides us an information on stationary waves in a closed organ pipe.

Musical sounds can be produced by oscillating strings, air columns, membrane, steel bars and many other oscillating bodies. In most of the instruments, more than a single part take part in oscillation such as strings and body f violin vibrate producing musical sound.

A hollow wooden or metallic tube used to produce sound is called an organ pipe. It is wind instrument such as a flute, whistle, violin, clarinet etc. their air column in it set into vibrations by blowing air into it from one end. If both ends of the pipe are open, it is called an open organ pipe; flute is an example pipe.

Consider a closed organ pipe of length L as shown in the figure (a). A blast of air is blown into it at the open end and a wave thus travels through the pipe and is reflected at the next end. Due to a superposition of incident and reflected waves, stationary waves are produced. In the simplest mode of vibration, there is a displacement node, N at the closed end air is at rest there and a displacement antinode, An at the open end as the air can vibrate freely.

In this mode of vibration, the pipe has one node at its closed end and one antinode at its open end. As observed in figure (a), the length, L of the pipe is equal to distance between a node and an antinode which is λ/4 where λ is the wavelength of the stationary wave. Then

It is the lowest frequency produced in the pipe. It is called fundamental frequency or first harmonic.

If a stronger blast of air is blown into the pipe, the notes of higher frequencies are obtained. The two nodes of vibration in the same pipe as shown in the figure which is called the first overtone and second overtone.

In this mode of vibration, there are two antinodes and two nodes within the pipe. If λ is the wavelength of the wave, then we have

In this node of vibration, there are three nodes and three antinodes within the pipe. If λ is wavelength of the wave, then

This is the frequency of second overtone or fifth harmonic which is five times the fundamental frequency.

A hollow wooden or metallic tube used to produce sound is called an organ pipe.

If both ends of the pipe are open, it is called an open organ pipe; flute is an example pipe but if one end is closed then it is closed organ pipe.

The lowest frequency produced in the pipe is called fundamental frequency or first harmonic.

The frequency of the first over tone is three times the fundamental frequency.

Videos for Stationary Waves in a Closed Organ Pipe 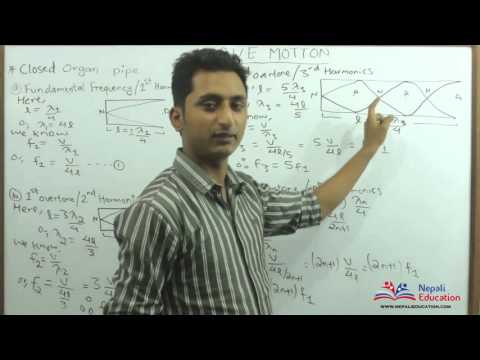