A potentiometer basically measures the potential difference between two points. This note provides us an information on application of potentiometer.

A potentiometer basically measures the potential difference between two points.

Determination of Internal Resistance of a Cell

Initiallly the key is open and the emf E of the cell is balanced in the potentiometer wire. Suppose the balanced point obtained at D and let l1 be the length of wire AD. Then E is balanced by p.d. VAD across AD. So,

Now, a known resistance R is provided by R.B. and the key K is closed. A current I’ will pass in the closed circuit of R and E. then a terminal p.d., V is obtained across the cell which is again balanced by the p.d. in the potentiometer wire. Let D’ be the point at which the null deflection is obtained and p.d. across AD’ be VAD’. So,

One of the cells say E1 is connected in the circuit by closing K1 of the two-way key and E2 disconnected by making K2 open. The jockey is slide along the wire AB to find the null point. When the jockey is placed at C near A on the wire, the length of portion AC is small and p.d., VAC in it is small. As the emf E1 is greater than VAC, the current will flow through the galvanometer, G in the direction of E1 and the galvanometer is deflected in the left direction.

When the jockey is placed at D near B, the p.d., VAD across portion AD will be greater than E1 and the current will flow through, G in opposite direction of E1. So, the galvanometer shows deflection in right direction. This work confirms that the circuit is correct and by trail and error method, a point says F is found at which G shows null deflection. At this condition, p.d. VAF across AF is equal to emf, E1 and in the galvanometer coil. So, whole emf E1 is balanced by the p.d. VAF in the length l1 of the wire. So, at the balanced condition,

A potentiometer basically measures the potential difference between two points.

Videos for Application of Potentiometer 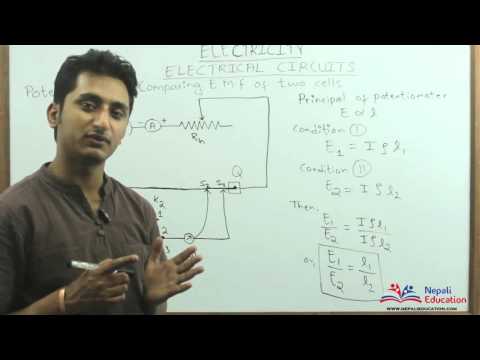 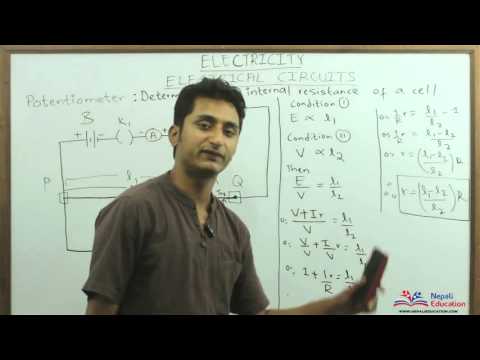 Potentiometer: Determination Of Internal Resistance Of A Cell