According to the principle of conservation of energy , energy of an isolated system is constant. It is neither be created nor be destroyed but it transforms from one type to another type. When an object falls on the ground from the certain height, its kinetic energy is converted into another form of energy such as sound energy, heat energy, light energy etc.

Suppose a body is moving on a smooth horizontal surface with a constant velocity, u. let a constant force F acts on the body from point A and B as shown in the figure, such that the velocity increases to v. the work done by the force is

From Newton’s second law of motion,

From the equation of motion

So, the work done on moving the body by the force is equal to the increase in its kinetic energy. Again we can write the above equation as

So, the final kinetic energy decreases.

Principle of Conservation of Energy

According to this principle, energy of an isolated system is constant. It is neither be created nor be destroyed but it transforms from one type to another type. When an object falls on the ground from the certain height, its kinetic energy is converted into another form of energy such as sound energy, heat energy, light energy etc.

The mechanical energy of a freely falling body under the gravity is constant. This is shown in the figure.

Let us take an object of mass m at a point A, above the ground at a height of h from the ground.

At A, the body is at rest and

Let the body falls freely from A to the ground and at a point B on its path, its height above the ground will become (h-x).

Thus, the total mechanical energy of the body remains the same at all points during the downward journey. As the body falls from the height h, its potential energy decreases while kinetic energy begins to increases; the total mechanical energy at any point being the same i.e. m gh. When the body reaches the ground, P.E. = 0 and K.E. is equal to the initial potential energy m gh at the height h. figure shows the variation of P.E. and K.E. with height. Similar case can be applied when a body is thrown vertically upward.

In the case of gravitational force, if we take work done in moving the body from Y to X, by gravity has to be taken as positive. So, they are equal and opposite i.e.

It means, the total amount of work done in a closed path in the conservative force field (gravitational field) is zero.

A force is said to be non-conservative, if work done by or against the force in moving a body from one position to another, depends on the path followed between these two positions.

Frictional forces are non-conservative forces. If a body is moved from position A to B on a rough table, work done against frictional force shall depend on the length of the path between A and B and not only on the positions A and B.

Power is defined as the rate at which the work is done.

Thus power of an agent measures how fast it can do the work.

Hence the power of an agent can be expressed as the dot product of the force applied and velocity of the body.

Videos for Work-Energy Theorem, Principle of Conservation of Energy and Types of Forces 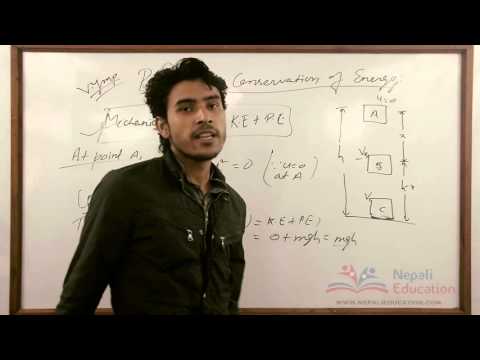 Principle of conservation of energy