The engine was designed by Rudolf Diesel in 1892 who was dissatisfied with the low efficiency of the Otto engine and began to investigate to increase its efficiency. In the diesel engine, air is working substance and diesel is fuel. This engine works on the four –stroke engine.

The diesel cycle on a P-V diagram

The PV-diagram for an ideal diesel cycle as shown in the figure. The portion EC represents the isobaric suction stroke. At point C the cylinder is full of air at volume V1 and atmospheric pressure. The portion CD represents the adiabatic compression stroke. At point D the volume V2 is 1/17 that of the volume V1. The portion DA represents the quasi-static isobaric burning of oil. During this process of Q1 amount of heat is absorbed. The volume at A is V3 and the temperature about 2000 K. At point A the supply of fuel is cut off and the remaining part of working stroke is represented by adiabatic expansion AB. At B the exhaust valve is opened so that the pressure drops to C, the atmospheric pressure. During the process BC, Q2 amount of heat is rejected to the surroundings, the portion CE represents the exhaust stroke in which useless gas mixture is forced out. At E out let valve O closes and inlet valve I is open. Then the cycle again starts.

Efficiency of a Diesel Engine

Merits and Demerits of Diesel of Engine

The diesel engine is heavier than the petrol engine, so it could not be used in light vehicles like aeroplanes, scooter etc.

Distinguish between Petrol and Diesel Engine

Whenever a physical system is allowed to distribute its energy freely, disorder increases i.e. entropy increases. For example, suppose you have a box with a partition dividing it in two, with a gas on one side of the partition and other side evacuated as shown in the figure. With all the molecules of gas on one side, gas has a highly ordered situation. However, if the partition is removed as shown in the figure, the gas molecules will distribute themselves throughout the box and be moving in random directions. We say that entropy of gas has increased because the amount of disorder has increased. As the disorder of system increases, its entropy increases. In order to change the disordered system to the ordered one, some work will have to be done.

Since Q1 – Q2 represents the work done W per cycle by the reversible engine operating between the two temperature T1 and T2, the temperature is measured in terms of work and hence this scale is also known as work scale of temperature.

The diesel engine was designed by Rudolf Diesel in 1892 who was dissatisfied with the low efficiency of the Otto engine .

If heat, dQ is added to the system, then dQ is positive and hence entropy of the system increases.

If dQ is subtracted from the system, then dQ is negative and hence entropy of the system decreases.

Videos for Diesel Engine and Entropy and Disorder 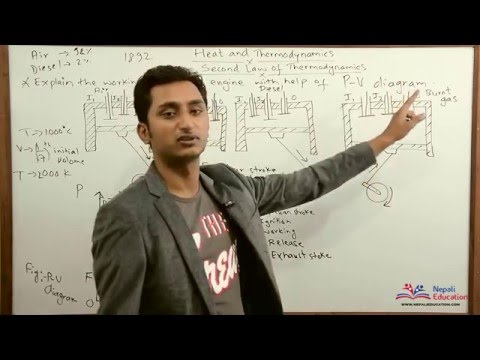