A prism is a transparent refracting medium bounded by two plane surfaces meeting each other along a straight edge.

Refraction through a prism

Let XYZ be a prism with refracting angle A. A ray of light PQ is incident on face XY at angle i. XY is reflected along QR in the prism and emerges out along RS. Here r1 and r2 be the angle of reflection of the first face and angle of incidence for the second face. The angle d between the direction of the incident ray and emergent ray is called angle of deviation. So ∠STL =d is the angle of deviation shown in the figure. MN and ON are normally drawn on face XY and YZ, respectively.

Deviation through a Small Angled Prism

Then the maximum angle of deviation

From the principle of reversibility of light, it follows that a ray making angle of incidence e on one face of prism, emerges out with the angle of emergence 900 and e. it can be shown that in each case

When a ray PQ is at grazing incidence on face XY of the prism XYZ and angle of Prism A is gradually increased, the refracted ray QR on the face XZ will make a bigger and bigger angle of incidence. At a particular angle of the prism, the emergent ray RS will graze along the surface XZ as shown in the figure. At this condition, we have, ÐQRT = critical angle, c. Again if A is increased further, the rays on the face XZ strikes at an angle of incidence greater than C and hence no ray emerges out of the face XZ. The figure shows the largest angle of prism for grazing emergence. This angle is called limiting angle of the prism. So the limiting angle,

Hence limiting angle of the prism is twice the critical angle.

Videos for Refraction through Prisms 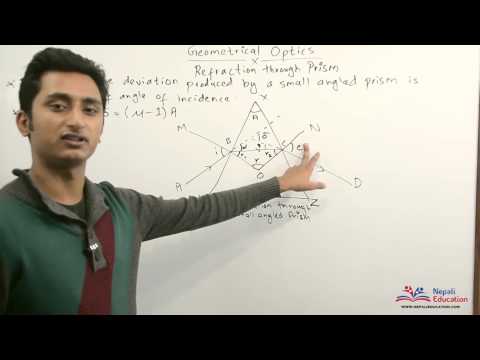 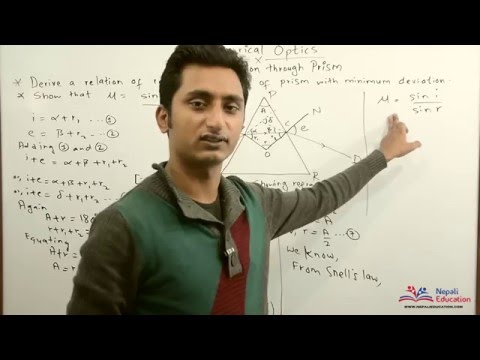 Relation of refractive index of prism with minimum deviation