Escape Velocity and Principle of Launching of Satellite

Escape Velocity and Principle of Launching of Satellite

Suppose that the earth is a perfect sphere of radius R having mass M. let a body of mass m is to be projected from a point A on the earth’s surface as shown in the figure. Join OA and produce it further. Let us take two points P and Q which are at the distance x and (a + dx) from the centre of the earth.

To calculate the escape velocity of the earth, let the minimum velocity to escape from the earth’s surface is ve. Then, kinetic energy of the object of mass m is

The total amount of work done in taking the body against gravitational attraction from the surface of the earth to infinity can be calculated by integrating the above equation within the limits x=R to x = \(\infty \), hence total work done is

To escape the object from theearth’s surface, kinetic energy given must be equal to the work done against gravity going from the earth’s surface to inifinity,

The relation shows that the escape velocity of an object does not depend on the mass of the projected object but only on the mass and radius of the planet from which it is projected. For the earth, g= 9.8 ms-2 and R = 6.4×106 m, then

In the following circumstances, the body will be in weightlessness condition.

Principle of Launching of Satellite

Let us suppose a very high tower on the surface of the earth. Consider a body is projected horizontally from the top of the tower with some velocity. The body will follow a parabolic path under the effect of gravity and strikes the earth’s surface at point A1 as shown in the figure. If the body is projected with the velocity greater than the initial velocity, then the body will strike the surface at point A2 which is farther from A1. If the velocity is gradually increased, the horizontal range will also increase and finally a stage will come when the body will not strike the earth’s surface, but will always be in a state of free fall under gravity in an attempt to fall to the earth. Then the body will describe a stable circular path around the earth and becomes a satellite of the earth. The minimum velocity required to put the satellite into its orbit around the earth is called orbital velocity of the satellite.

Videos for Escape Velocity and Principle of Launching of Satellite 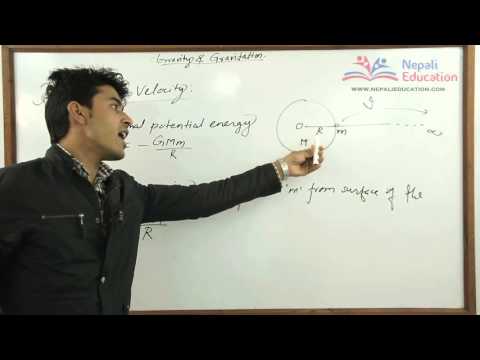