The giant family of sun including planets, asteroids , comets etc is called solar system. This note contains information on sun and our solar system.

The sun is a medium-sized light yellow colored star whose diameter is about 1392000 km and is situated at about 2.5 × 104 light years away from the galactic center of the Milky Way. The distance between the sun and the earth is about 1.5 × 108 km. About 75% of the total mass of the sun is made up of hydrogen and slightly lesser than 25% of the mass is made up of helium and the rest is composed of carbon, oxygen, and other elements. The temperature of the surface of the sun is 6 × 103 oC and that of the core is 1.5 × 107 oC. The mass of the sun is about 2 × 1030 kg. It takes 2.5 × 108 years to complete one revolution around the galactic center ad that period is called one cosmic year.


The sun is made up of three layers: Photosphere, Chromosphere, and Corona. Photosphere is the central hottest and thinnest layer. The chromosphere is thicker than photosphere and is visible only during the total solar eclipse. Corona is the thickest layer which is spread about millions of kilometers around the chromosphere. The sun produces most of the energy by nuclear fusion on its core.

Importance of sun in solar system:

Planets are the heavenly bodies that revolve around the sun in their own separate elliptical orbits. In the solar system, there are eight planets and out of them, the first four planets which are present inside the asteroid belt are called inner planets. They are Mercury, Venus, Earth, and Mars. But the remaining four planets are out of the asteroid belt and are called an outer planet. They are Jupiter, Saturn, Uranus, and Neptune.

A brief description on each planet is as follows:

Some important facts about planet:

The International Convention of International Union of Astronomers (IUA) held on 2006 in Prague of Czech Republic has removed Pluto from the list of planets and introduced a new term, Dwarf planet for it. A new definition of the planet has been given by the convention. According to it:

- A planet should have its own orbit around the sun.

- It must be in round shape.

- It must have a fixed neighborhood with other planets.

Satellites are the heavenly bodies that revolve around the plants. They may be natural or artificial.

The piece of rocks revolving around the sun between the orbits of Mars and Jupiter are known as asteroids. It varies in diameter and there are about 200 asteroids are present in the solar system. They are also known as minor planets or baby planets or planetoids. They are composed up of various rocky and metallic substances. Juno, Vesta, Hermas, Eros, Pallas, etc. are some of the asteroids present in the solar system. The Ceres is kept in the group of Dwarf Planet and Pallas is the biggest asteroid with a diameter of 532 km.

A frozen chunk of gas, dust, and ice which begins to resemble a foggy star with a long shiny tail when it approaches the sun is known as comet. The comet can be divided into three parts: nucleus, coma, and tail. The nucleus is made from frozen gases, ice, and dust. When it approaches the sun, the outer layer of nucleus starts to evaporate, which is known as coma. The nucleus and coma combine is said to be head of a comet. When it approaches nearer to the sun, pressure from the solar wind elongates the coma, the elongated part of comet said to be tail of the comet. It is always pointed away from the sun. As the orbit of the comet around the sun is highly elliptical, sometimes it has to pass very close to the sun and sometimes very far from the sun. They are non- luminous bodies, which appear bright by reflecting the light of the sun, so they are termed as tailed stars.

Halley's Comet is a very common comet discovered by an English astronomer, Edmond Halley in 1682 AD. Name and revolution period of some other comets are given below:

Small pieces of rocks or metals which enter the earth's atmosphere from outer space with very high speed are called Meteors. They are also called the falling star or shooting star. Usually, meteors are burn from the height of 7 km to 120 km and during this, the time velocity of meteors is about 70 km/s. We can see the meteor showers in the sky of the north and south poles.

The largest meteorite found in Hoba West near Groofontein, in South West Africa, weighs about 60000 kg and is still at the original spot where it struck the earth. It is named Hoba. About 35000 kg, moderately weighing meteorite, is in the American Museum of Natural History in New York City and was discovered in 1894 AD by Admiral Peary in Greenland. A meteorite that formed a crater of 1265 m in diameter and 174 m in depth fell at Arizona of America, about 50000 years ago. 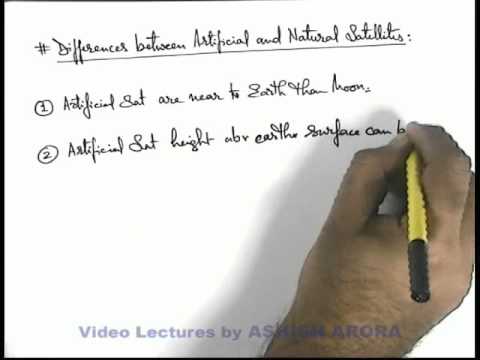 Differences Between Artificial and Natural Satellites

Why is huge amount of energy produced by the sun?

Name the planet that can be seen in the lower western sky in rainy seasons.

Name the planet that takes 29 days to revolve around the sun.

Name the planet whose surface resembles that of the moon due to the presence of craters.

Name the planet that appears the brightest in the sky.

Name the planet that is known as morning and evening star.

Name the planet that appears red in color due to mineral lock limonite.

Name the planet whose two thirds part appears white due to frozen ice of gases.

Name the planet whose surface cannot be seen due to the presence of the dense cloud formed of frozen methane and carbon dioxide around it.

Name the planet that is the largest planet of the solar system.

Name the planet that has three rings of ice fragments around it.

Name the planet whose axis subtends an angle of 27 degree against its orbital plane.

Name the planet whose surface has a great dark spot as large as the earth.

Name the planet that is made of cloud of minute methane crystals.

Name the planet that is the most distant planet in the solar system.

What are asteroids? Where are they mostly found?

What is the periodic comet?

Write one example of a comet. Comet is seen at a gap of a long period, why?

One example of a comet is the Hyakutake Comet. The comet revolves around the sun like planets but the orbit is much larger than those of planet. Because of this reason each comet is seen at a gap of long period.

The tail of comet increases or decreases when it goes round the sun. Write the reason.

Comet is a small object with a head and a tail. Head is the main body made up of hard particles of methane, water and ammonia embedded in ice. The tail consists of dust or gas. As the comet approaches the sun, the crystal vaporizes and gas glows in the form of a long tail. When the comet moves away from the sun, the tail shortens due to less heat. This is why the tail of the comet increases or decreases when it goes round the sun.

The 5 importance of the sun are as follows:

Why does meteor disappear before reaching the earth's surface? The comet is not a star, why?

When meteor falls, it comes in contact with the earth's atmosphere. The friction that results causes the meteor to burn completely to ashes leaving nothing to reach the earth's surface. Comet is a heavenly body that shines brightly when it comes near the sun. Comet is seen with a head and a bright tail because of sun's light. As it does not have its own light, it's not a star.

Mention any three reasons of launching artificial satellite into the space.

Three reasons of launching artificial satellite into the space are as follows:

A comet is seen only after long period. Why?

A comet is seen only after long period because It takes a very long time to revolve.