The age of the earth has been estimated about 4.6 billion years. A time scale that covers the earth’s history from its origin to the present is called geological time scale. The chronology is divided into hierarchy of time intervals: Eons, Eras, Periods and Epochs. This note is description on how geological time period of earth is differentiated.

This eon began about 570 million years ago and is still continuing at present. In this eon, vertebrates and phanerogams are developed. The eon is further divided into following eras: This eon is extended from 3500 to 4600 million years ago. In this eon, life was not originated on the earth. But there were rocks, water and air all through this time on the earth. 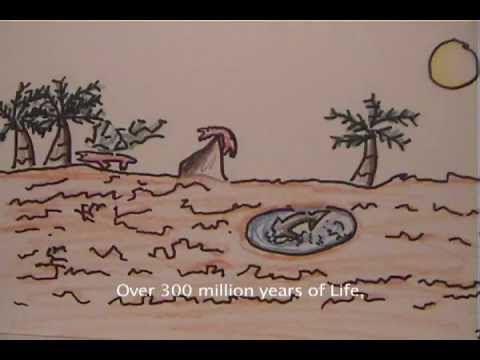 What is the age of the earth? How has it been estimated?

What are the main eras in which the earth's history is studied? Give the time period for each era.

Which organisms' fossils are found in the rock of Azoic era?

What is Paleozoic era? Which organisms evolved during this era?

In the history of the earth, the time period that lasted from 750 million years ago to 240 million years ago is termed as Paleozoic era. This era is subdivided into seven periods- Cambrian, Ordovician, Silurian, Devonian, Carboniferous (Mississippian and Pennsylvania) and Permian. During the Paleozoic era, fern were the most developed plants reaching up to a height of 100 feet. This era also saw the first true seed plants, the conifers. It was rich in marine animals like corals, sea lilies, sea urchin, eurypterids, sharks, armored fish, etc. and reptiles, Amphibious also appeared as first air-breathing animals with backbones to walk on land.

What is Mesozoic era? In how many periods is it divided?

What is tertiary epoch? Which organisms evolved and developed during various periods within this epoch?