Birth is an important component mainly related to fertility in the study of population education. This note has information about the factors affecting birth. Birth is an important component mainly related to fertility in the study of population education. Fertility deals with the birth. The population growth of a place/country depends upon fertility because the country with high level of fertility has rapid growth of population.

Therefore the factors affecting birth are described as follows: - The biological factors are related to conception and childbearing that may affect fecundity or fertility of a woman. There are certain social values and assumptions which creates psychological pressure upon the couples to reproduce. Some of them are: - 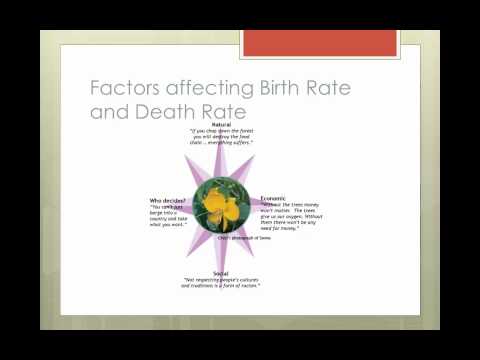 Lesson 2 - Why global population is changing

Age is a factor affecting birth.

What is meant by fertility?

What is meant by fecundity?

Fecundity refers to the biological and physiological capacity of reproduction of bearing child.

List the biological factors which affect birth and describe any two of them in brief.

The following are the main biological factors which affect birth:

a. Age: Human beings become fecund at a certain age. Fecundity begins in women with the onset of menstruation. On average, women are considered fertile from 15 to 45 years of their age. But their fertility performances is not equality active throughout this period. Fertility grows highest in 25-39 age group. Then it begins to slow down gradually. In males too fertility performances is weaker as they grow older, there is not any sharp limit for them as in the female.
b. Health: Health affects all our activities. So, reproduction is also affected by the condition of health of a person. Those who are diseased and unhealthy cannot reproduce well or cannot give birth to a healthy baby. But fecundity is high in those whose healthy is properly maintained.

Make a list of economic and socio-cultural factors affecting birth and describe any one from each group briefly.

The following are the economic and socio-cultural factors affecting birth:

What are the psychological factors affecting birth? Explain any two of them.

The psychological factors affecting birth are as follows:

Prestige of family: The prestige of family depends upon the number of children and often upon that of son. In their attempts to maintain family prestige, people give birth to many children.

Sense of competition: Most of the Nepalese family is joint family. Any tow brother may have completion in bearing children because they have equal right to the share of their parents property. They can also compete with those others than the ones from their family.