This note is prepared by Mr.Sampurna Dewapatey This note is related to the English composition-Story writing..To get more help in writing story please click the note and learn more...

A stroy is a long or short narration where there are characters who carry out actions in a certain place and time.

Components of a story:

You can begin your story in the following ways:

Division of paragraphs while writing story:

You can divide your paragraphs when there is the change of:

There are 3 ways of ending a story.

1. Conclusion:Draw all the events that have happened to the story to an end. It is a traditional way of ending the story.

2. Cliff- hanger : Leave the reader in suspense,wondering ehat will happen next.

3. Reflective: The narrator or character thinks about something that has happened in the story.This can be done direct speech.

Here are some expressions for beginning and ending a story.

13. It was a fresh and bright early morning in summer when....

If you are asked to develop a given skeleton in as sensible story keep these ideas in your mind:

2. Read the give skeleton find out plot,setting and the character.

3. Introduce at least 2 to 3 dialogues between the characters.

4. Use of manolague int he case of one characters int the story.

5. Dialogues and monologues are written in direct speech.

6. Write an intesresting title that explains the theme og the story.Ypu can select a proverb that siuta the story like " Tit for Tat", " A stich in Time Saves Nine" . You can mention the characters as the title.For eg: " The father and the Son" , " Oliver Twist".

7. Introduce the main characters.Use some adjectives to describe them about this appearance,their personalities,their strength and weakness.

8. Write a moral of the story.

Once there lived an old lady in a town.Her name was Mrs.Brown.In spite of her old age,she was living there all alone.The villagers often talked about her cleverness and prosperity.

The old woman feared of hiring a doctor as the town was full of fake doctors.Yet she decided call a doctor in one condition. "Condition!" the doctor who she called in said doubtfully."What's it?" Mrs Brown replied, "I' ll pay a large amount if I'' cured but nothing if not." The doctor agreed and visited her house daily for treatment. The furniture in Mrs. Brown's house cured him. He delayed the cure and began delayed the cure and began to take away an item of furniture everyday he came there. Finally,he cured her and demanded his fees . Although the old lady got her eyesight restored,she refused to pay the odctor. She just said that " I still can't see it well". The doctor was sure that she could see well. So e brought a court case. The judge asked the lady " Mrs.Brown,why are you not paying the doctor?" " Your honour! My eyesight is not properly restored I still can't see all my furniture, the lady said to the doctor. The judge understood and gave a verdict in her favour. Mrs. brown won the court case with her honesty and wil, and got her eyesight restored as well.Moral: To know when to be generous and when firm- that is wisdom. 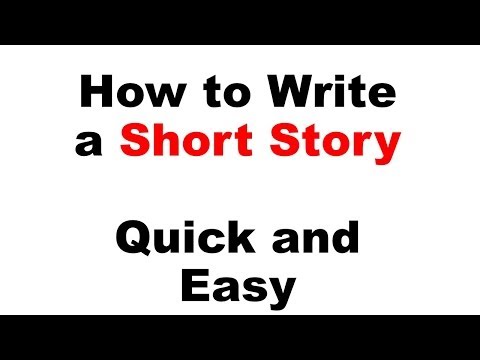 How to Write a Short Story - Quick and Easy

John Truby - How to introduce the characters in your story.